How to lose 5lbs overnight

This has been well overdue but for a few reasons, and none of them bone idleness. I am mildly proud to say that I will be graduating from the University of Aberdeen this month, with an MLitt in Museum Studies. I’ve been doing this as a part time effort as I knew the chances of completing it in one year were vanishingly small due to Stupid Arm. Speaking of Stupid Arm, I can confirm that in June I underwent an elective amputation of the meat-anchor I’d been hauling around for the last 5 years. It weighed slightly more than 5lbs (still didn’t get Slimmer of the Week FFS) but sadly I was unable to keep it for old time’s sake, as a souvenir of my time on the orthopaedic ward.

The operation was about 2-2.5 hours in length and only required an overnight stay – at my request, they didn’t boot me out early to free up a bed or anything. I didn’t really feel any need to stay, as it wasn’t causing me any pain (well, I still had the same phantom pain as I’ve had since 2014 but see below) and I didn’t need any time to adjust to life as a one-armed bandit. The occupational therapist came around to see me before I left but had little to say as I was an old hand (thank you, I’ll see myself out) at managing with one arm. I may well have been their lowest maintenance patient ever, gone within 24 hours. 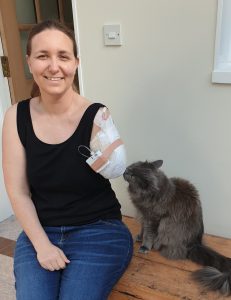 I had a funky battery-powered dressing for a couple of weeks after the op, replaced by a compression tube for a further two weeks. The bandage buzzes as it works the vacuum pump to suck out any grungy bits, which initially was every 30 seconds or so but after a day or two, only beeped once an hour if that. The cats weren’t impressed by the noise though! To begin with it felt as though there was something uncomfortable pressing into my armpit although more discomfort than pain. That went away fairly quickly and then it was just the phantom pain which unfortunately has increased since the op. I was already on an 8 or 9 out of 10 most days, but since having the arm off it is almost always a 9 during the day with a much greater frequency of 10s at night.

This wasn’t unexpected to some degree; I did know that it was a possibility, it just feels like whatever set of dice get thrown, they always come up snake-eyes for me: failure of nerve grafts, no drugs working, increase in phantom pain. Oh well,  I am reliably informed that worse things happen at sea.

The stump viewed from below, about 5 weeks on.

Post-op care was straightforward, three visits back at the orthopaedic ward and 6 weeks of aspirin to prevent a clot, although as a non-smoking (reasonably) young and active person I was at low risk of any complications. I was a little disheartened at first as to how bulbous the stump looked but most of this was swelling which subsided over time and I’m happy now with the way it looks. I didn’t have any balance issues either. The wound healed really fast and the scar is neat and tidy; I’m experimenting with Bio-Oil to see if it makes any noticeable difference in how this scar looks compared to the many others I have. I might slosh some on the delightful concave scar on the top of my foot where I had to have the skin graft. I’ll post back with my findings.

On the whole I am very glad I had it done. The improved quality of life is immense – even things as mundane as sitting up in bed or getting out of the bath require no thought or planning any more. The tiny amount of recovery I had from the nerve surgery just manifested on extra pain whenever my hand dragged along something, so things like my partner pulling the duvet cover up don’t wake me like they used to.  Of course there are things that you have to take into account post-amputation – for example, I had to go through my wardrobe and decide what I wore often enough to justify having altered. The lovely lady I found to do all my alterations had never done a sleeve-ectomy before, so we both learned a few things about tailoring!

What I’m especially happy with is the way I can wear coats properly again now without cramming my arm-inna-sling underneath. And of course, the greatest benefit on an everyday level is not having to wear my sling at all, freeeedoooom! I really hated wearing slings, even once I’d found one that didn’t drag on my neck it was still hot and sweaty in summer (and left amusing tan lines).

So, I will update further of course, but so far I’m very glad I had it off (hurr hurr).