TBPI: What’s it all about?

I don’t know about you, but until I had my unplanned dismount (ably assisted by an aggregates lorry), I’d never heard of the brachial plexus. I have enough of a vague recollection from doing GCSE Latin to puzzle out that brachial is related to the arm, but that was about the limit of my knowledge regarding this injury. It’s a pretty rare condition, and a surprising amount of the medical staff I encountered in hospital didn’t seem to know that much about it. Until my awesome surgeon came to my bedside to talk to me the first time, I’d been told that I’d have ‘reduced fine motor skills’ and assumed that meant I’d just have a bit of a gammy hand but otherwise would recover. Nearly 3 years on with a more or less completely paralysed arm and the phrase ‘reduced fine motor skills’ still produces a hollow chuckle. As the purpose of this blog (besides being somewhere for me to whinge about my arm) is to hopefully give fellow TBPI sufferers some information, the best place to start is probably by asking: ‘What is a traumatic brachial plexus injury?’

There are two main types of injury to the brachial plexus: traumatic (TBPI) or obstetric (OBPI). Both are fairly self-explanatory; this site is dedicated to traumatic injuries rather than those caused at birth. A BPI can also be caused by brachial neuritis or illness, which is rarer. There will be a lot of crossover between these causes but as this is a personal blog and I lost the use of my arm in an accident, that’s what I’m going to cover. If you want to read more about people who have been managing a BPI since birth, you can check out sites like Ellie Erbs.

The range of trauma that can cause a TBPI is extensive. Just from hanging around in the Facebook groups set up by/for BPI sufferers I’ve come across:

The brachial plexus is a pretty delicate thing. It’s the network of nerves that give you the ability to move your arm, bend your elbow, use your hand. Everything from throwing a ball to writing a letter to picking your nose is controlled by the brachial plexus, and damaging these nerves can cause a range of debilitating effects from weakness or numbness to total paralysis, depending on which nerves you injured, and what you did to them. The nerves are like hairs in that they have roots which connect them to the spinal cord and the rest of the nervous system. Damage to these nerves can take the form of:

The latter two are the more serious of the nerve injuries you can sustain, with avulsion being the worst by far. A rupture is damage to the nerve along a section where it’s branched off the central nervous system, but an avulsion is where the nerve has been forcibly ripped off the spine, roots and all, like pulling a hair out of your head. At present, surgical options for avulsions are more or less nonexistent, as the nerve can’t be plugged back into the nervous system. Ruptures are operable, with varying degrees of success; I had an operation to take the sural nerves out of the back of my legs to try and bridge the gap in signal transmission caused by the ruptured nerve. Unfortunately in my case it made sod all difference, but hey, that’s life.

Nerves: which does what?

You may hear medical professionals or other BPIers referring to the nerves that have been damaged, and like all medical terms it can get a bit confusing, so here’s a basic diagram of the different nerves that make up the brachial plexus & what they are responsible for: 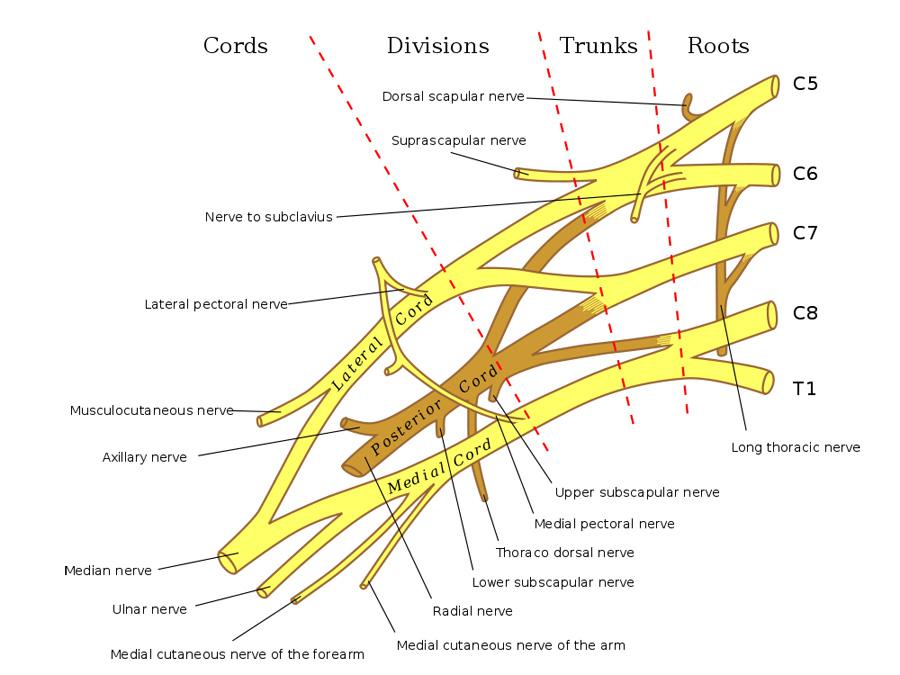 Anatomy of the brachial plexus, from http://emedicine.medscape.com/article/1877731

C5 is responsible for shoulder abduction, elbow flexion and also supplies the diaphragm.

C6 allows you to bend your wrist back.

C7 extends the arm by straightening the elbow.

C8 lets you bend your fingers.

T1 allows you to spread your fingers.

The nerve transfers I had were supposed to restore some function to C5 & C6, to allow me to use my arm to some extent, being able to bend my elbow, but unfortunately I didn’t get anything back except an intensification of the ever-present pain whenever my thumb is touched. Useful, huh.

So you or your loved one has a TBPI, what do you do now?

The first and most important thing you need to do is consult a BPI surgeon; not a neurosurgeon or an orthopaedic surgeon – get someone who is experienced specifically with TBPI cases. I can’t stress this enough; it’s vital for your chances of recovery to get someone who knows what they are doing and can give you the best options in terms of nerve transfers, for example. I was lucky enough to get Lucy Cogswell at the John Radcliffe in Oxford. She’s a plastic surgeon by classification but has a brain the size of a planet and has dealt with TBPI cases for some time. If you’re in the UK you have two main centres of TBPI excellence:

If you’re outside the UK I’m afraid I can’t suggest anywhere, but if you join the Brachial Plexus Injury Awareness page on Facebook & ask, there are loads of helpful people from all around the world.

The second thing you should bear in mind is that this is a lifelong and life-changing injury. You will spend years in recovery, not months (unless you are some kind of nerve regenerating super mutant, in which case, you lucky sod). If you have avulsions then you are on a sticky wicket and may never recover function to those nerves. I realise that’s a pretty brutal way of putting it but there it is. Note that I said  ‘may’; there are some people on the Facebook group above who have avulsions and have regained some measure of function but they are by far in the minority.

Following on from this, this injury presents differently from person to person. Two people can damage the same nerves in the same way and have vastly different recoveries. Bekka Cochran has a similar level of injury to me and we both had nerve transfer surgery fairly soon after our respective accidents. Yet she has recovered a fair amount of function and ability in her hand and arm, while all I have regained is the ability to slightly rotate my forearm, which isn’t terribly useful in the grand scheme of things. I am fairly certain that Bekka is one of the aforementioned super mutants, however. 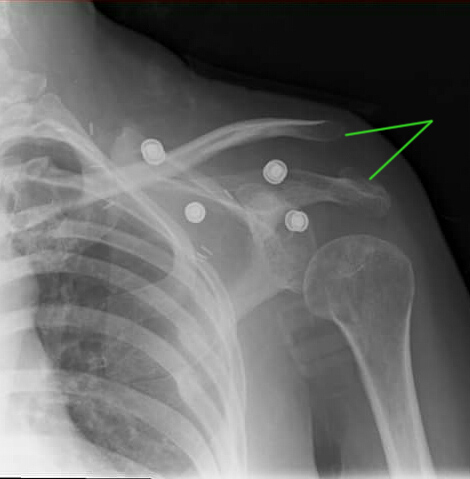 The bones linked by the green lines are supposed to be joined….

If you have a TBPI, chances are that you have other injuries too, which may pale into insignificance compared to losing the use of your arm, but don’t underestimate the time and energy it will take to recover from them. For me, I lost the top of my left foot, gashed my lower leg to the bone, lacerated my spleen, broke 4 ribs (one of which punctured my lung), broke 2 vertebrae and the bottom of my shoulder blade and my collarbone and shoulder blade parted company entirely. Then there were the general cuts and bruises and attendant stiffness. I walked with a crutch and shuffled around like one of the living dead for a little while after my accident. With all the opiates I was on for the pain, I was pretty much a zombie mentally too. I think it took me about a year to 18 months to start feeling more like myself which was a combination of general healing and ditching all bar one of the prescription drugs (more on medications in a future post).

I didn’t take advantage of any of the resources out there on the internet for TBPI sufferers for over a year after my accident because it took me that long to come to terms with the injury and get to the point where I felt comfortable talking to other people with a BPI. My first interaction was on a forum where I posted an introduction and asked a few questions, mostly asking about how to cope better with the pain and if it would ever go away. The first response I got was effectively ‘I’ve had this for 36 years and the pain never gets any better’. At the time I was upset but I suppose when you’ve been dealing with this crappy injury for nearly 40 years you’re likely to be a bit abrupt with people. The unvarnished truth hurts (but not as much as the phantom pain does, hey). So, if you’re ready to meet some fellow TBPIers, here’s where you can find them:

The interwebs – TBPI forums are available through the TBPI Group or the United Brachial Plexus Network. The former is UK based and has an AGM every year at Squires Bike Cafe near Leeds. The latter is American and is aimed more at OBPI but there are sections for us on there too.

I hope that you’ve found this info useful and that my future rambling/whining about my arm are entertaining and informative. Keep your chin up and remember: this, too, shall pass.