So having sworn blind that I didn’t want a prosthetic I ended up being referred to the clinic at Woodend Hospital by the pain management team I’m under elsewhere, who think that my increased post-amputation pain is because I’m physically lacking an arm which is confusing my brain. I mean, as far as my brain was concerned the arm was already gone anyway, but whatever, they are the experts and at this stage I’ll try anything to be honest. I’ve just had a run of 4 days and nights of 11/10 pain that has been exceptionally hard to deal with and has affected my mental health more than usual (but that might be the new medication I’m trying at the moment to help with sleeping).

I was very clear with both the pain team and the prosthetics clinic that I wasn’t bothered about the aesthetic side of things and that if I had to have a prosthetic it would need to be functional to some degree; if I was bothered about the aesthetic side of things, I’d have kept my own arm. I said that I wanted something with a movable elbow joint and a flexible wrist, and ‘fingers’ to grip stuff with. What I had in mind was being able to **nerd alert** paint miniatures again (eg. WH40K, Hordes etc) as I’ve had to give up most of my hobbies because it’s either impossible to do or too hard for me at present (guitar, baseball, painting, riding) and while I’ve found ways around some of the limitations, like switching to three wheels and using foot pedals for video gaming, it’s not the same. 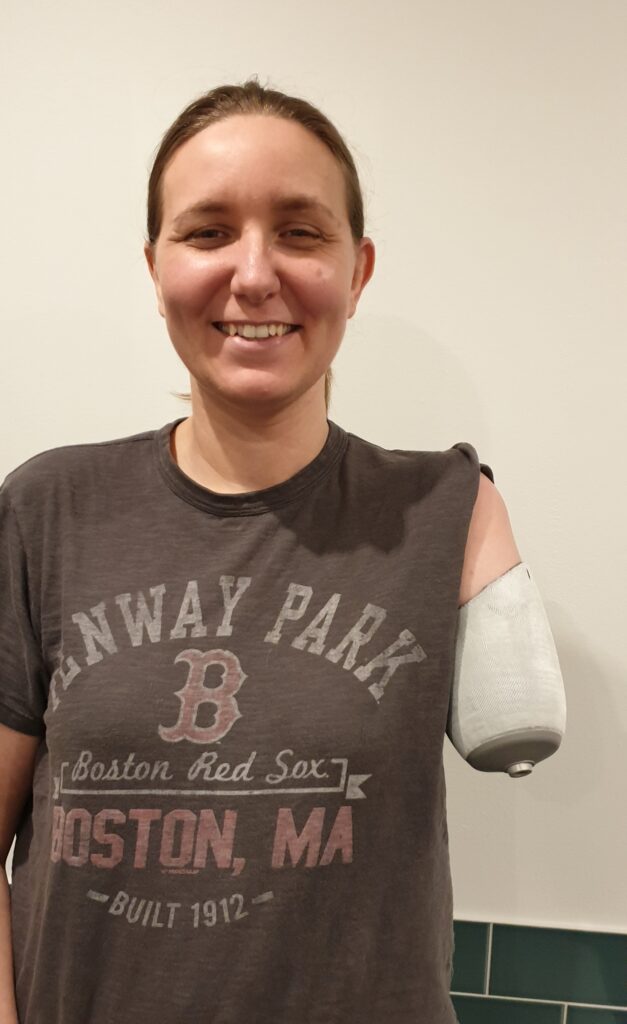 The silicon liner with the attachment for the rest of the arm at the tip.

The cap on the end of the stump is where the tube that fits onto the elbow joint goes, then there will be a forearm and wrist/hand. Because I don’t want one with pretend flesh on it should be pretty light and not need a harness, which was one of the things that put me off initially. The liner is impregnated with silver for antimicrobial protection, although I’ve got another one to try next week that has copper in too, so I look forward to setting off airport alarms ad infinitum. It’s supposed to create a Faraday cage effect to protect the frazzled nerve endings in the stump from picking up on anything environmental that might aggravate the pain. I don’t understand science enough to know if that’s a realistic outcome but worth a try I guess.

I’ll be going back next week for a try of the enhanced liner and hopefully to mess around with the arm itself, so will update accordingly then 🙂

3 thoughts on “Rise of the RoboHev”