Well, more like a shoulder to cry about, to be honest. I’ll have more news on my new prosthetic arm on the 13th March which is when I think I’ll be picking it up, but in the meantime, I thought I would write about the state of my shoulder post-accident and how a lovely young orthopedic surgeon fixed it for me.

When I hit the lorry it was all left side damage: broken joint between collarbone and shoulder-blade, broken tip of shoulder-blade, 4 broken ribs, punctured lung, lacerated spleen, severe tissue damage to leg just under my knee, and lost the top of my left foot with two toes sewn together because they nearly came off too. All on the left side.

The Acromioclavicular joint (where your collarbone is joined to the shoulder-blade was completely separated in my case (because why do anything by halves) and while the shoulder doesn’t provide a true socket in the same way as the hip does, my humerus ‘fell out’ of the socket because of the damage to the joint and also because the muscles surrounding it had lost signal from the nerve damage so lost all their stabilising ability. This picture shows a normal shoulder: 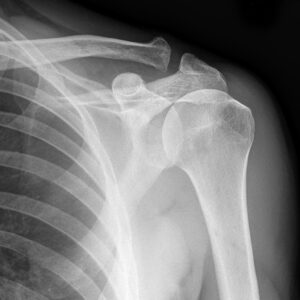 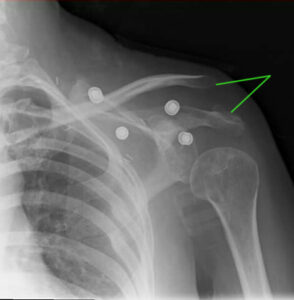 The dots are the studs in the sling pad I had on when the x-ray was taken.

The green lines show the two bones that are supposed to be together, and you can see how far down the top of my humerus is compared to the ‘normal’ one on top.

I went to see my nerve surgeon who tried to get me some recovery back through sural nerve grafting (which unfortunately failed) and she said that it would be possible to take a strip of muscle from my leg and attach it to my shoulder and arm to sort of hoik it back into position. The downside of that was that I would have to wear a shoulder spica cast (a body cast that raises ones arm in the air at 90 degrees to the body, with a bar brace between elbow and hip) for 3 months, 24 hours a day, to make sure that the muscle transplant wasn’t disturbed. I wasn’t 100% on board with this option as it would have meant no showers (and said 3 months would have been over summer) and I would have had to work out how to sleep in one. She kindly sent me down to the plaster room, who made one up for me to take home and try out, but it was pretty clear halfway through that I was going to hate it. I had to sit down at one point as the compression and heat made me feel ill 🙁

Option two was to go see an orthopaedic specialist called Steve Gwilym, a fresh-faced young surgeon who sent me for an x-ray and then asked me in a perfectly deadpan manner:

‘Did you know your shoulderblade isn’t actually attached to anything at the moment? Not only did you break the joint with the collarbone but you also ruptured all the ligaments that hold it onto the chest wall. The only thing holding it in place is the overlying skin and muscle so it’s probably just as well that you can’t use that arm.’

Well, that was news to me – now I could add ‘scapulothoracic disassociation’ to my vocabulary. I was surprised that it had slipped the notice of the NHS to this point (about 3 years post-accident by this point) but never mind.

There were two options for fixing it: either a plate fitted to drag my collarbone back into shouting distance of my shoulderblade, or drilling holes in the spine side of my scapula and doing the medical equivalent of cable-tieing the bone to my ribcage. I opted for the plate as the perforated shoulderblade sounded a bit scary to be honest.

This is what I had fitted (or very similar, this isn’t my x-ray): 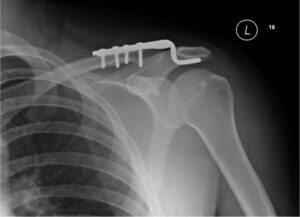 From the Egyptian
Orthopaedic Journal http://eoj.eg.net/

This worked like a charm and for once I could look at my shoulder without feeling sick at the horrible bulge of the collarbone sticking up under the skin. Here’s a photo to show the huge difference the surgery made: 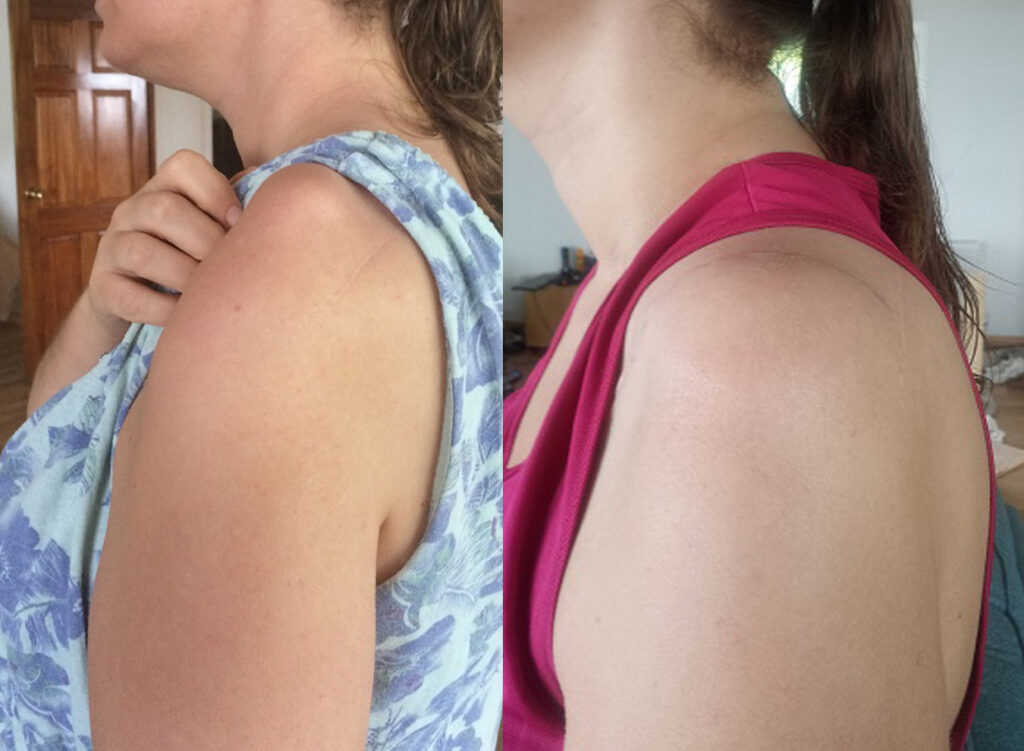 Left: before Right: after

I was over the moon with it but after a while I noticed a kind of ‘clicky-grindy’ feel especially when my arm swung forwards if I wasn’t wearing my sling. I went back for a checkup and mentioned this and Mr Gwilym said it could be the wire or screws catching on the copious scar tissue that was in there, and offered to replace it with a smaller plate. So, in for another op I went, but when I came around from the op he told me that the bones had knitted back together strongly enough that he felt comfortable with just removing the plate entirely, which meant that I had nothing there but my own bones, back where they should be.

It left me with yet more scars to add to my collection but I seem to be one of the lucky ones scar-wise; they heal up fast and don’t look too horrific. Here’s a selection of healing-in-progress from the second op where the plate was removed (apologies for mix of viewpoints, didn’t have someone on hand (ho ho) to take the first two pics for me: 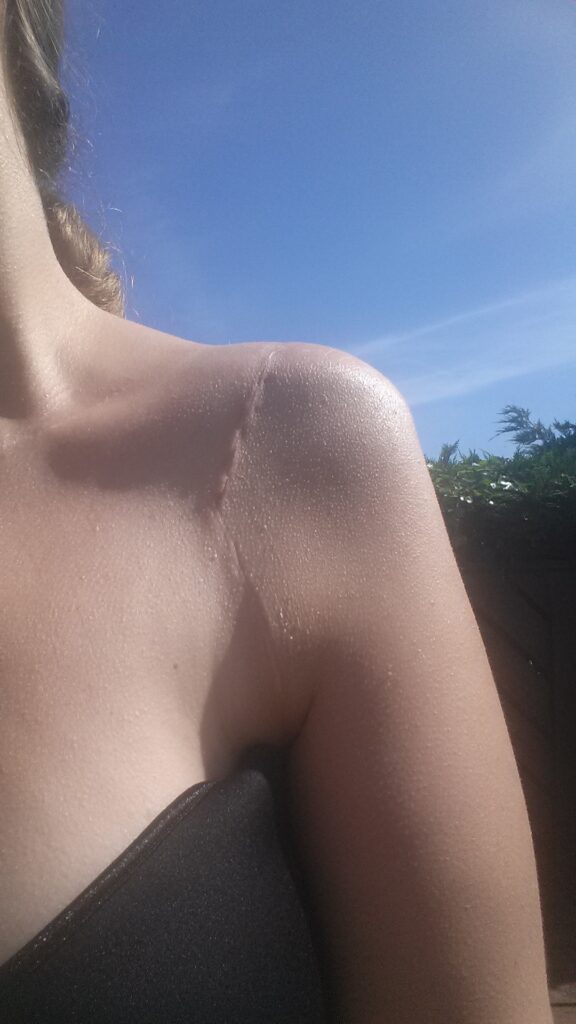 About a week post-op if I recall – the second scar the runs down to my armpit was from a different op. 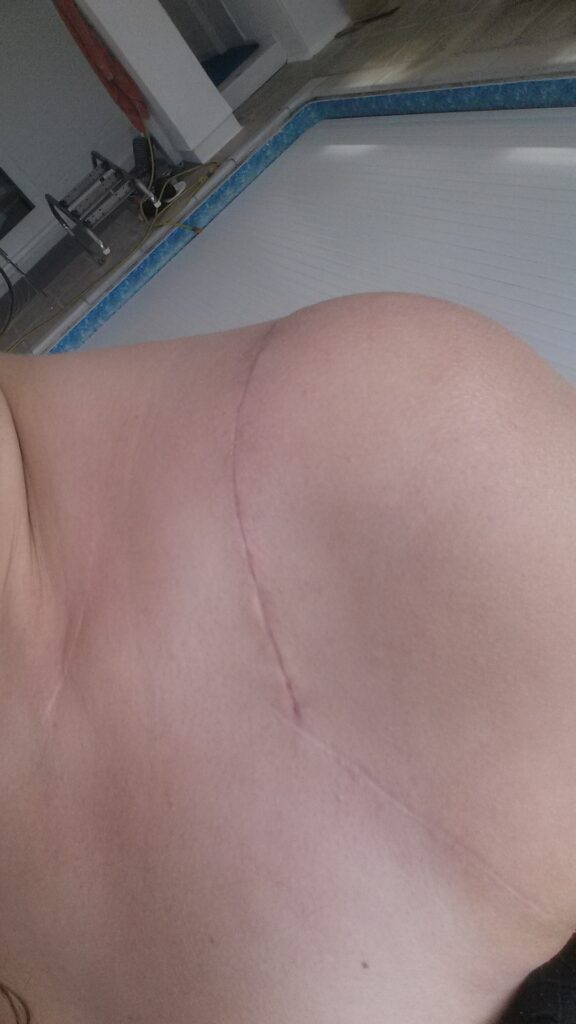 A week later and it’s settled down a bit.

This is what it looks like today, three years on (top-down view): 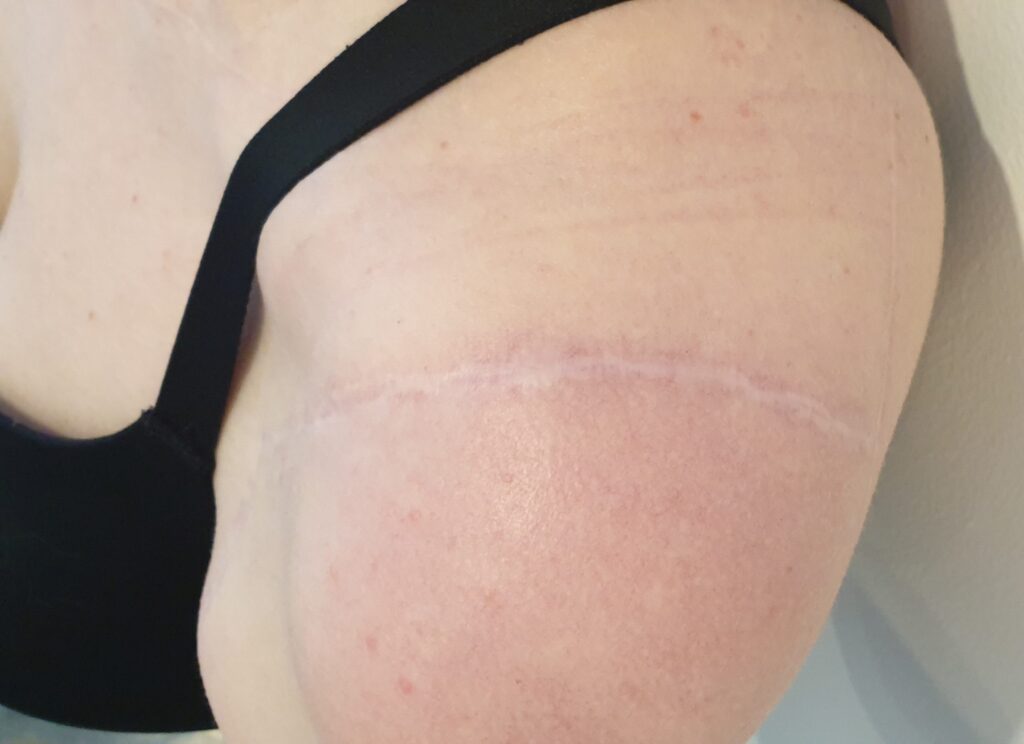 Pretty smooth now and the pink has faded to white more.

The surgeon went in through the original scar he made when he first put the plate in when it was time to take it out so that was a two-for-one special scar. They used a combination of dissolvable stitches and, believe it or not, medical superglue to close up the wound.

So, there you have it, my shoulder story. Definitely the best outcome I’ve had from an op so far!